Ron Fancher is a failed investment banker and resident hobo at Dive Alaska. He learned to dive when he was 12-year old, and only ever had one dream job: yak tender.

It took that 12-year-old-Ron almost two decades, an undergraduate degree in International Finance, and a soul-crushing stint with a large investment finance firm based in Germany to realize that all he wanted to do was “give people the SCUBA.” He was a changed man.

After a couple intentionally-ambiguous years traveling the world with his wife, Kristie, Ron ended up in Alaska, and then at Dive Alaska. Ron enjoys his job these days, and loves the people he works with and spends time around.

Ron spent most of his adult life either abroad, or in Los Angeles, CA, and moved to Alaska specifically for the diving. He is regarded as having a fanatical love of exploring Alaskan waters. If you ever feel that you are being watched while near a body of water in the state, it might be Ron.

In his own words: “the three pillars that hold up my life are: Kristie, professional football, and diving in Alaska.” Whether that’s Dutch Harbor, Whittier, Resurrection Bay; if it’s Alaskan diving, it’s for Ron. 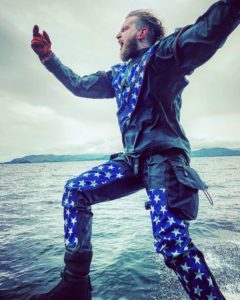